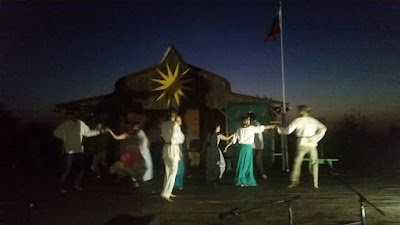 Here at Vedrussiya, there are more than two hundred ancestral places, which are the little homelands where a couple live and sleep. In Russian they are called rodoviye pomestya, and they are arranged in about five glades of forty pomestya each. The village was founded by readers of the “Ringing Cedars of Russia” series. They are inspired by Anastasia’s ideas, the Siberian recluse who features in the books.

Some of the family places are larger, and some are smaller. They are interspersed with oak forests and connected by grassy dirt roads. I went into five rodovoye pomestie and saw the houses that people build, the gardens that they plant, and the joy and love with which they invite people to see what they have created. They call these places “dimensions of love”, because all the building and gardening is done by the couple with a sense of love for their children.

Each resident here owns their land completely. The people are the highest authority on their own family place. Government regulations allowed almost everyone to build their own house. The houses are sometimes a bit wonky, but the feeling within and around them is very beautiful.

This is the most effective and efficient way to organise politics and government, because everyone has complete self-determination about the destiny of their selves, homelands and families. The feeling of unity and comradery in the village is great, even with me, though I am from so far away in Australia. There is a sense of common purpose here, to return to the Earth and make it beautiful again for our children to enjoy and prosper. Then we will be buried and return again to the same region, within our own families and those of our neighbours and fellows.

In time, these villages become their own nations, with traditions, cultures and unique ways of getting along together. Delegates from each village will meet at regional and continental gatherings to decide bigger issues that pertain to the larger community, the peaceful civilization of native people on the Earth. 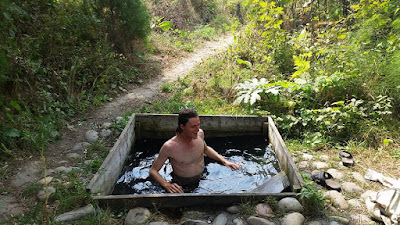 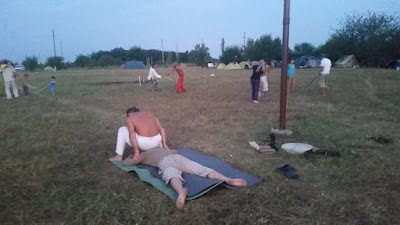 Yesterday, Dimitri (Dima) gave us a tour of his family place. He built his house with his wife and the help of neighbours and friends. He has a solar panel which provides electricity, and they hired someone to drill wells that provide their water, about 20 metres deep. I can’t remember if they catch rainwater, but they  should. Dima says if they could water the plants more, they’d be farmer millionaires, but for now there’s only really enough for the family. Some residents want to bring electricity to the village, but others don’t think it’s necessary. Dima bought his family’s hectare of land six or seven years ago, when it was very cheap. Plots in this established and successful village now apparently cost about 5000 euros.

Dima and his family have a huge variety of plants. There is watermelon, rockmelon (cantaloupe), tomatoes, cucumbers, corn, chilli and capsicum, as well as an orchard with apples, pears, walnuts and cherries. And there is a vineyard with fifty varieties of grapes. Wine is a passion of his father, and he wanted to keep the family tradition, though it’s not yet a commercial vineyard. He makes grape juice and small amounts of wine for his family and neighbours. In among the vines, watermelons and rockmelons grow on the ground. We ate a lot of watermelon at Dima’s place. It was delicious and there was more than enough for everybody.

Dima has a swing and a pravilo exerciser, where each of the four limbs are strapped to a rope and gently pulled outwards in a frame, to relax the pressure of the joints.

The nicest part of the pomestie was Dima’s family tree, the rodovoye derevya. It’s an oak tree that  looked like it was growing very fast. It had fifty centimetres of fresh light green growth on each of the four leading shoots, which were pinky red. It is about three metres tall now. Dima mowed a circle of about ten metres diameter around the family tree, and walking up to this place feels like a sacred site, though relaxed and comfortable, too. I went up and touched the tree, looked at it and said, “You’re a good tree, you’re going to make this family really happy.” 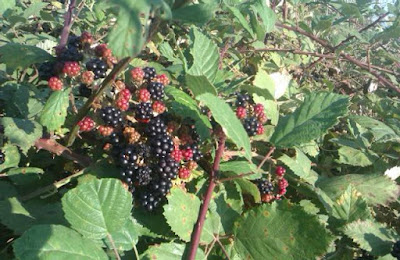 Around the edge of the circle there are rose bushes and blackberries. Dima laughed because only one rose came into flower this year. He said they’re just small plants yet, and roses take a lot of care. If you don’t prune them, they become briars. Then he invited us to eat some blackberries, and we all did. It was the best blackberry I’ve ever tasted in my life. 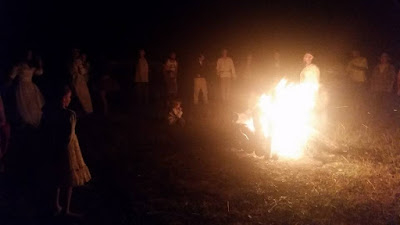 Dima’s daughter was conceived and born on the rodovoye pomestie. Dima and his wife birthed her on their own. Dima himself took the little child from the water, just as it is described in the “Ringing Cedars of Russia” books, in the ancient and future way of the Vedic Russ people on Earth.

I could already tell as soon as I saw the three of them together, by the radiant energy of love that came from them, relaxed, gentle, calm, carefree, cheerful exuberant and joyful. It was the greatest family I’ve ever seen.

There is something very important embedded in this idea of an ancestral homeland, where couples create a perfect environment to give birth to their children and provide for the family sustainably, forever.

The family homeland becomes the  dwelling place for our whole family, including all the past ancestors and future descendants. Practically speaking, a hectare can support a father, mother, grandparents, great-grandparents, children, grandchildren, even great-grandchildren. Some of the children, of course, will go and make their families on other plots of land, nearby or further away.

As the benefits of living on rodovoye pomestie become known, more support from government and philanthropists is growing. Rodovoye pomestie create ecologically clean produce. They restore the fertility of dry and barren soil. They provide a place for people to think and reflect, leading to new inventions, scientific innovation. And, they let love grow in our families. 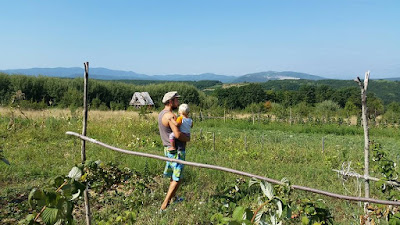 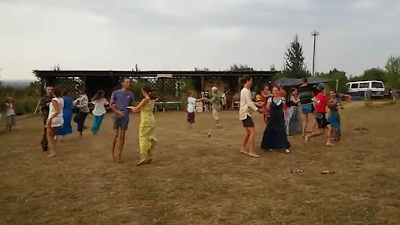 In the long run, living on rodovoye pomestya is stable and simple. But Kristina says there are plenty of challenges to overcome at the beginning. Nevertheless, for many us, it’s the only way to live. It is ecologically and socially beneficial for everyone—the people living on pomestie, and the people who don’t want to yet. Once we’ve seen the possibilities, nothing else is satisfying.

One region of Russia, the Belgorod Oblast, has already created a law whereby any willing citizen receives one hectare of land for free from the government for the purpose of creating a rodovoye pomestie. This law is now being considered at the federal level, first to do with the Far East, and then to spread to all of Russia.

I have seen the effects of rodovoye pomestie, and the effects of creating one with your sweetheart, of conceiving a child on your rodovoye pomestie, of giving birth to a child on your rodovoye pomestie. The love between the mothers and the fathers here at Vedrussiya village is greater than anywhere I have ever seen all around the world in my whole life. Something significant happens in the process. There are people here who cannot help but smile at life. Their happiness is infectious, and we bedraggled travellers from Western countries, from English-speaking countries, are immediately uplifted and inspired just by seeing them and being near them. 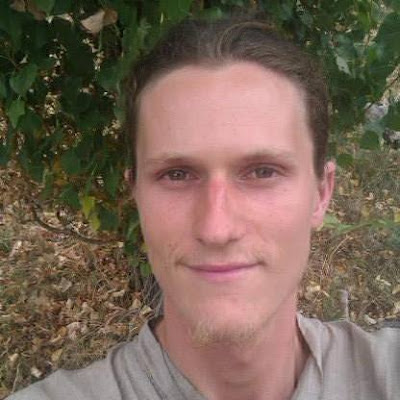 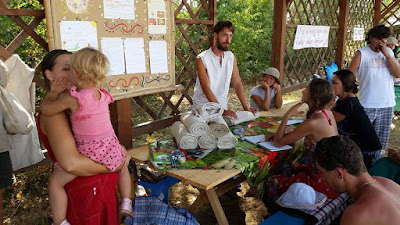 The people here glow with special beauty. They are not totally living an ecologically pristine lifestyle, and flaws are lovingly tolerated. Many, most, still drive cars. Many still eat some food from shops and have jobs like teaching at the village school, or being a travel agent, or doing construction around the village and also in the neighbouring villages. They come from all walks of life, farmers, dancers, managers, office workers, businesspeople. Yet they all managed to create rodovoye pomestie, plant a hedgerow, a garden and build a dwelling.

Their festival is beautiful. We do complicated and engaging folk dances, with spins, turns and changing partners. The craft here is higher quality than I have seen anywhere in the world. Hemp fabric made by hand with no mechanical implements, only using metal for the scythes to cut the plants. Wood carving, preserves, oil pressing, honey, fresh produce. Delicous. Highest quality I’ve ever experienced.

This is the importance of rodovoye pomestie, to set up a self-sufficient environment to free our thought, so we can start thinking about more important things, than what to eat for our next meal. So we can start thinking about how to clean up the big stinky, polluting mess that has covered this planet Earth. How we, as a population of seven billion people, can live peacefully, ecologically pure, socially perfect lives together here on the Earth. 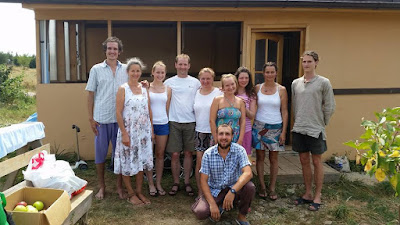 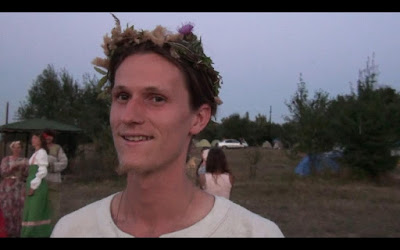 Children at this village are already considering such topics. They will inherit land of their own, with fully self-sufficient gardens, houses built with love for them by their parents, established business relations with distributors and markets to earn plenty of money from their produce for minimal effort. And what will they do with the rest of their time? They will live, happily, and they will create new ways that we have not yet thought of to perfect this land in which we dwell. To help others perfect the land in which they dwell. To make this whole Earth a beautiful and pristine place.

This is what is happening here at Vedrussiya village. There is nothing anybody can do to stop this. The best thing that we can do now is to create our own rodovoye pomestie, and join together between different cultures, between different countries, between the Russian world and the English world, and then the German world, the Spanish world, the French world, and so on. To understand the idea of the rodovoye pomestie. To feel your own soul and the souls of your family line, of your eternal family. This is the best thing we can do. Together, over time and space, we will improve our environment and make it more perfect.